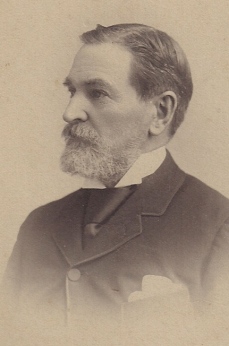 This week’s prompt for the 52 Ancestors challenge is “Invite to Dinner”. Well, who better to invite to dinner than my 2nd great grandfather, Samuel Prowse. Not only would he be likely to bring some delicious food, what with being an exporter of fish, lobster and agricultural produce from Prince Edward Island, I’m sure he could also be counted on for some scintillating political conversation. Samuel was in politics for over 30 years, including 13 years in the Canadian Senate (and unlike a more recent senator from Prince Edward Island, he actually lived there).

Samuel Prowse was born in Charlottetown, Prince Edward Island in August 1835. He was the 6th of William Prowse and Agnes Rider‘s 7 children. William and Agnes had emigrated from Devon, England in the mid-1820s, with their son Joseph in tow (their first son, Richard, having lived only a month). They had 5 more children after they settled in Charlottetown.

Samuel married Eliza Elizabeth Willis on October 17, 1856. Eliza was born in Wiltshire, England in 1834 and had immigrated to Prince Edward Island with her family at the age of 8. Samuel and Eliza had two children in Charlottetown – Frederick in 1857 and Albert (my great-grandfather) in 1858. In 1859, the family moved to Murray Harbour, PEI, where Samuel went into business. Eliza died 3 weeks after giving birth to their first daughter, also named Eliza Elizabeth, in February 1860. Tragically, the baby only lived for a few months, and son Frederick died a couple of years later, at the age of 6.

A year after the Eliza’s death, Samuel married her older sister, Louisa Jane Willis. He had two more children with Louisa – William, b. 1862 and Samuel, b. 1869.

Samuel’s business, first Prowse and Son and later, when William joined the business, Prowse and Sons, flourished in Murray Harbour and became a major employer in the region. In addition to a operating General Store, Prowse & Sons exported dried fish, canned lobster and agricultural produce. The business included a starch factory that used local potatoes to produce starch, a lumberyard, and even a can factory, where employees made cans throughout the winter for use during the next canning season.

In addition to his successful commercial ventures, Samuel also had a long political career. He first entered politics in 1867, at the age of 32, when he was elected to the PEI Legislative Assembly. He was defeated in the 1873 election, but then was re-elected in 1876. He remained in the PEI legislature (except for a brief period in 1882 when he was defeated in the general election and then re-elected in a bye-election the same year) until Sept. 14, 1889, when he was appointed to the Canadian Senate by Sir John A. MacDonald. He remained in the Senate until his death in 1902.

During his time as a Senator, one of the causes that Samuel strongly supported was a tunnel linking PEI to mainland Canada (The Guardian, Charlottetown, March 12, 1891, Pg 2) – a vision that would only be realized a hundred years later, with the opening of the Confederation Bridge in 1997.

He also advocated on behalf of the Lobster Packers and Fishermen Association. At a meeting on December 31, 1890, Hon. Senator Prowse was thanked for his “services in the interest of the packers and lobster fishermen of this Province in presenting our case to the Department at Ottawa, working indefatigably to have the Government recognize the reasonable demands of the packers and fishermen.” (The Guardian, Charlottetown, December 31, 1890, Pg 2)

As a symbol of his success and status, Samuel Prowse had a substantial home built in Murray Harbour around 1875. The house remains a prominent landmark in the village of Murray Harbour, and has been identified as one of Canada’s Historic Places. This house was owned by three generations of Prowses -Samuel, his son Albert (my great grandfather), and his son Gerald (my great uncle) before being sold. 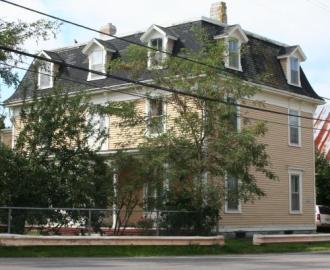 Samuel died on January 14, 1902 and was buried in the Murray Harbour Old Cemetery.

Senator Samuel Prowse was the first ancestor that I got to know, and one of the easiest to research. It all started in the mid-late 1970s when my family was contacted by Vernon Hargrave, a distant cousin who was researching my 3rd great grandfather, James Willis (father of Samuel’s wives Eliza and Louisa). In 1980, we received  a 180-page, typewritten, photocopied, spiral-bound history of the Willis family that included lots of information on Samuel. Almost 30 years later, I came upon it again while going through a box of photos and documents at my mother’s, and it was a great starting point for researching Samuel (and the rest of the family). I’m amazed at how much information Vernon was able to gather in a pre-internet age.

The best thing about having a politician ancestor is that they’re easy to find. How I wish I could find this much information about some of the others!

This site uses Akismet to reduce spam. Learn how your comment data is processed.