My father’s full name was William Lockhart Cooper. As a kid, I found his middle name amusing and wondered who had locked is heart and did my mother have the key? Dad’s middle name was the maiden name of his maternal grandmother, Clara Lockhart (52 Ancestors #7), who died when my grandmother was 7 years old. It was only when I started researching that line that I found his namesake in the tree – my 3rd great grandfather, William Lockhart.

William Lockhart was born about 1795 in Nova Scotia (exact location unknown). The Lockhart genealogy, “Lockhart families of Nova Scotia and New Brunswick“, says that he was possibly the oldest son of Timothy Lockhart and Elizabeth Teed of Sackville, New Brunswick. Those are the parents that most people have attributed to him in family trees.

The only problem is, Timothy Lockhart and Elizabeth Teed’s youngest son was also named William, born about 1812. While it’s not uncommon for people to recycle names, that’s usually done when the first person of that name has died. My William Lockhart was very much alive when Timothy & Elizabeth named their son William. So I’m highly sceptical that these are the right parents, but I haven’t yet figured out who else it could be. Maybe DNA will help unlock this mystery.

In 1829, William married Adelia Beckwith. At the time of their marriage, William was living in Moncton Parish. On the 1851 census, they were living in Salisbury Parish, Westmorland County with their 9 children, including my 2nd great grandfather, David H. Lockhart. I’m not sure what the H. stood for – perhaps this could be a clue to who William’s parents were. David had a son named John Harris Lockhart – could David’s middle name also be Harris and could that be a family name?

In 1861, William was widowed and was living in Havelock Parish, Kings County with his 3 youngest children, next door to his married daughter Martha Matilda (Lockhart) Mills. In 1871, William was living with his son John and his family in Salisbury. Note that Salisbury Parish in Westmorland County borders Havelock County in Kings County, so although he moved counties, he likely didn’t move very far. 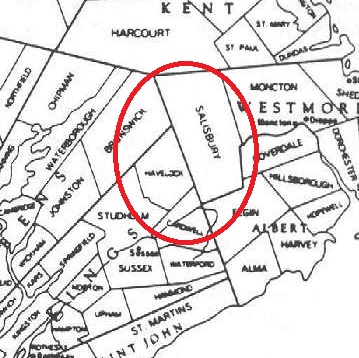 I have not been able to find William after the 1871 census. He presumably died before the 1881 census, but to date I have found no death record, cemetery record or obituary. Don’t you just love ancestors who just appear out of thin air, with no apparent parents, and then just disappear again at the end of their lives!

At least his name lived on.

The last 52 Ancestors post that I wrote was at the beginning of April. It’s now the end of June. Oops! Although I got a bit (okay, a lot!) behind on posting, I do plan to get back to it.

I’ve decided to continue to number them according to the week of the #52 Ancestors challenge and not in the order that I post them. So although the last one was #13, the next one will be #25. I’ll fill in the gaps in between when I can, but they won’t be sequential.

I have an Index page that lists all of the prompts and the associated blog post, so if you’re interested in seeing which posts I’ve done (and which ones are still to come), that would be the best place to check.